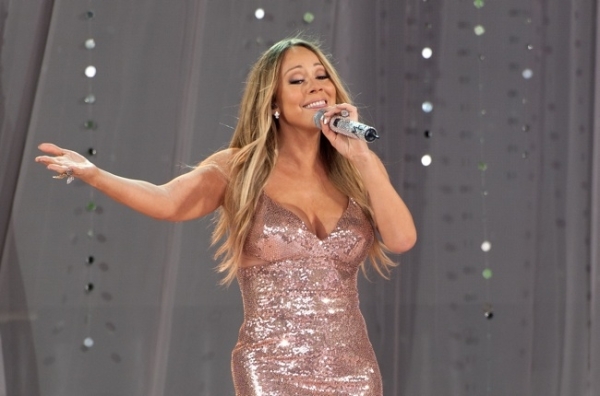 I guess its true about what they say about Halloween yielding the largest of profits and which genre of costumes sell the most? Kids costumes. Mariah is now back in the ranks as a photo of the diva’s children sparks her re-entry at No. 24.

On Halloween Carey snapped a shot of her kids (Monroe and Moroccan) in their costumes (both dressed as Superman) that got 112,000 likes on Instagram. In turn, the number of new followers to Carey’s account on the platform increase by 184% over the previous frame.

According to our friends at BILLBOARD.COM The Social 50 ranks the most popular artists on YouTube, Vevo, Facebook, Twitter, SoundCloud, Wikipedia, Myspace and Instagram. The chart’s methodology blends weekly additions of friends/fans/followers along with artist page views, song plays and reactions as measured by music analytics company Next Big Sound.On Facebook where it was cross-posted, it received over 350,000 likes (to date) which helped fuel the 243% rise in conversation about Carey on the platform, which gave way to 189,000 new fans (up 170%).

Above Carey at No. 17 is the highest debut of the week, as the late Lou Reed arrives on the tally. His arrival is fueled by conversation and buzz generated by his death on Oct. 27.

Even further down, A$AP Rocky debuts on the Social 50 for the first time at No. 48 as the New York rapper releases the video for “Angels” from his early 2013 release Long Live A$AP. The release prompted a 123% increase in conversation on Facebook which led to the addition of 243,000 new followers on the platform (a 125% increase over the previous frame). His YouTube channel where the video was posted on Oct. 31 receives 878,000 views during the week, a 176% increase.

Up near the top of the chart, Eminem makes a predictable rise into the top five, as the chart reflected the week leading up to the release of his new album, “The Marshall Mathers LP 2.” He moves 11-4 to reach his second-highest position to date since he hit No. 3 the week of Sept. 21 when “Berzerk” — the first single from “Marshall Mathers LP 2” — was released.

Meanwhile, Miley Cyrus (2-1) and Katy Perry (1-2) swap places as Justin Bieber rebounds 6-3. Demi Lovato dips 3-5 as One Direction swings (8-6), beginning an upward trend we can expect to carry into next week. The group released the video for their newest single “Story Of My Life,” late in the current charting period. That continued exposure could push them up the tally next week.

Ariana Grande holds steady at No. 7 while Nicki Minaj climbs (9-8). Britney Spears tumbles 4-9 as Justin Timberlake remains at No. 10 to close out the top 10.